When you make the leap and buy your first electric vehicle or electric car, your next decision will be on the appropriate charging station. Today, in this Duosida Portable Electric Vehicle Charger review we will find out whether this might be the right charger for you. Let the games begin! 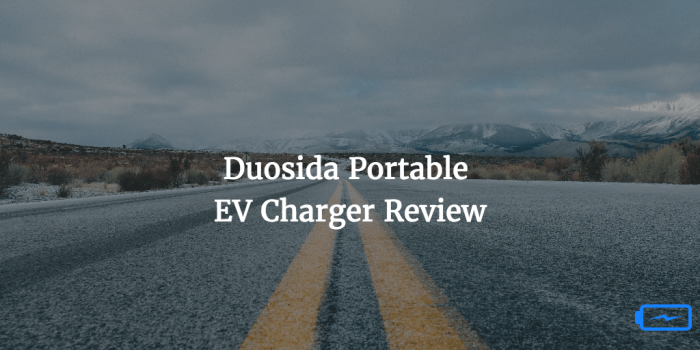 First of all, what it is that we buy isn’t a “charger” itself, the real charger is directly inside your vehicle and converts all the AC energy it receives to DC thus charging your EV’s battery. What we buy are actually called EVSE - or Electric Vehicle Supply Equipment - which allows you to connect your EV’s charger to your house outlet, but as it’s a pretty common term, we’ll also be using it when referring to the EVSE, and if you own a battery charged vehicle it’s absolutely assured that you’re going to want one.

All right, now that that’s out of the way we can move on to the Duosida Portable Electric Vehicle Charger, it’s a newly released EVSE that promises great things, we’ll talk about them soon, when we’re buying a EVSE we have to think about its charging speed, portability, amperage capacity, connectivity, the length of the cable and, of course the price.

Now, there are many options in the market and since it’s a rising market, everyday there’s more and more, making it a little harder to choose which one to get, the one that fulfils your need, that you can use, and, of course, the one you can afford. We’re going to take a look at the previously mentioned aspects to keep in mind when buying a new EVSE so you can make your own checklist as to whether this charger is the right one for you, so, let’s get started shall we?

If you’re as confused by Level 1/2/3 charging stations as I was, here’s some great information on that.

The Duosida Portable Electric Vehicle Charger is a Level 2 EVSE, runs on 16 Amp - which is nice in case you want to save some money, it is also recommended if you’re not an independent homeowner, since most of the time, landlords or apartment buildings will charge you more if you use a 30 Amp, not to mention that it’s much simpler to install a 16 amp adapter than a higher amperage one - it also uses 60HZ, USA standard.

What doe it mean to be a Level 2 EVSE? It means that it handles between 220V-240V now, your average charger, the one that comes with most cars is a Level 1, that only handles 120V, which means the Duosida Portable Electric Vehicle Charger will refill your car in less than half the time than the one that came with your car.

Now, do you really need it to be that fast? Well in some cases people claim that they just charge their car overnight and they’re full, and while it may be true it isn’t always the case. For instance If you get home late at night with an empty battery, and you have to leave early the next morning, you’ll really appreciate the charging speed. It might not happen often, but when it does you’ll be pissed off – I can tell you. The less your car has to be charging the more you’ll get to go outside and have fun.

Also keep in mind that you’re likely to upgrade to another EV in the future, one with a bigger battery (they get better at a rate of roughly 3-4 percent each year). The bigger battery will need more electrical power to charge in the same time. So if you buy a cheap charger now, you’ll have to buy a new charger with your next car – who has that kind of money?

Of course we don’t mean portability as in “charge on-the-go”, we mean how simple is it to install and to move from one place to another. Why is this important? You really don’t want to go through all the trouble of getting an electrician to rewire your whole garage or to install a big box of a charging station, you want to be able to “plug and charge”.

As simple as plugging your smartphone or laptop, just install a 6-20R 220V-240V socket and you’re ready to go. Just plug the Duosida portable EV charger and you can start charging your car right away. This means that you can also install the same socket to another place of your garage and you can move your EVSE from one place to another. Also, thanks to it being so small you can just toss it in your car in case you’re planning to go on a road trip or if you’re going to stay elsewhere. Also its 21ft long cable make it really practical for when your socket isn’t very close to your car; as you may know, it isn’t recommended to use extensions with your EVSE.

The better connectivity is a great plus, with it you can use it not only for your car, but you can also lend it to a friend in case he needs a charger for an emergency, and since it is so simple to install, it’s great for this task.

Cost of the Duosida Portable EVSE

Of course, the price is always important. Usually some hardwired charger stations can be somewhere among the lines of $400 to $600 and beyond, thus it plays a big role in the decision making process of buying a new EVSE. The Duosida Portable Electric Vehicle Charger is $299 on Amazon.

Of course, it lacks the fancy WiFi or Bluetooth integration. But what it lacks in tech gadgets it makes up in portability, ease of use, and price. WiFi and Bluetooth connected chargers also might stop charging your car when they lose signal.

Personally, I care more about charging up than having built-in consumption metering. You can always get that feature with a metering adapter, which usually costs a lot less.

So, after taking a look at those aspects, it’s time to check on a different perspective, the design. The Duosida Portable Electric Vehicle Charger took the “less is more” philosophy really serious, it is as simple as can be, plug and charge. As simple to handle as it is to install, it includes a LED indicator that shows you when it is plugged in, connected, charging or fault. It’s pretty small so it will fit pretty much anywhere in your garage or in your house. It’s so simple that anyone can understand it.

We like to think that the equipment we buy will last a lifetime, but it’s better be ready for the worst-case scenario, that’s why it’s better to get things with a good warranty. This is, yet again, a great selling point for the Duosida Portable Electric Vehicle Charger, which as it comes with a full warranty that covers all manufacturing defects for a whole year.

According to most buyers they haven’t had the need to use it, since the production quality at Duosida seems great and the chargers rarely come with defects.

After reviewing this charger from front to back you can see that it has whole lot of great things, much more than bad ones. Some of the aspects that could be a little better such the cord length - which could be a little longer or retractable to save space -, but in an all around perspective it is a great EVSE. It has a great compatibility, able to charge any EV. It’s ridicolously simple to install, literally plug and charge and it has a faster charging speed than your average level 1, having the capacity to charge some EV in just 3-4 hours, from 0 to full. The simplicity of the design can be a pro or a con, since it is so simple it is easy to use as well as to install, but if you really want a piece to make your garage look modern - this EV charger is maybe not what you’re looking for. You get a good bang for the buck as you only spend $299 and it will last you a long time. At 6.6 kW it also has enough power to charge up your next EV and since it is so portable you can take it with you when you move.

Yes, there are some other EVSE that are more advanced and others that just look better, but they’re either more complicated to install, less portable, bigger, and almost always, a whole lot more expensive. Some of them range between $900 and $1500 - that’s when the Duosida Portable Electric Vehicle Charger gets to go close to the top on the must-get devices for your electric vehicle.